According to a report in the print edition of A Bola (as relayed by Sport Witness), Tottenham continue to be hot on the trail of Benfica striker Haris Seferovic.

Seferovic had an impressive campaign at Lisbon last season, netting 26 goals in all competitions.

The striker took that form into the European Championships, scoring thrice as Switzerland made it to the quarter-finals, where they lost to Spain in a penalty shootout.

O Jogo reported two weeks ago that Tottenham were leading the race for the 29-year-old but added that Nuno Espirito Santo’s men could face competition from Everton and West Ham.

A Bola have now backed up the claim regarding Spurs’ interest in Seferovic, revealing that the striker continues to be on the Lilywhites’ radar.

The report reveals that Tottenham were already following the Swiss international even before the Euros but his performances in the competition have piqued the North Londoners’ interest. 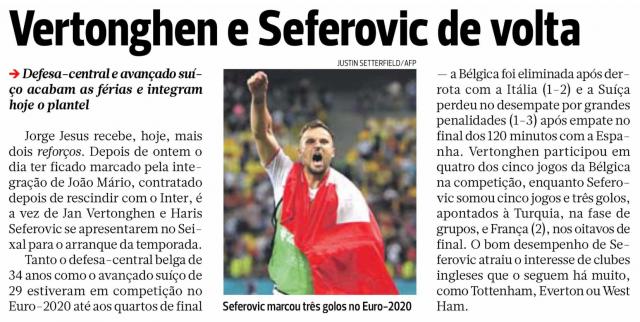 I believe Seferovic could be much more useful than Carlos Vinicius was as a target man and a potential backup to Harry Kane. Compared to the other strikers we have been liked with over recent weeks (like Ings and Vlahilovic), the 29-year-old is also likely to be more content with a bit-part role.

‘I wouldn’t’ – Pundit urges Premier League club to hold on...

‘Heavily loaded’ – Pundit claims Spurs do not need to sign...

‘I wouldn’t’ – Pundit urges Premier League club to hold on...