Home News Some Spurs fans react to report that Giovani Lo Celso could be...
2
SHARES
ShareTweet

Some Tottenham fans on social media have admitted that they would like to see the club cash-in on Giovani Lo Celso in the summer if there is a decent offer for the midfielder.

Lo Celso has had a disappointing campaign so far as injury problems have prevented the midfielder from getting a run in the side.

The Argentine has been out of action since mid-December but Jose Mourinho admitted that he is now back in training and insisted that he remains a vital part of his plans.

Fabrizio Romano claimed this week that several Spanish clubs have expressed an interest in signing Lo Celso in the summer but the journalist added that the former Real Betis man is happy at Tottenham.

However, some Spurs fans on social media are worried that the 24-year-old’s career in North London will go the same way as Erik Lamela’s amidst his injury struggles.

They insisted that they would cash-in on Lo Celso and use the funds to bring in other attacking reinforcements in the summer.

I would sell personally

Do we cash in on Lo Celso? https://t.co/A5lFWTggSz

Sell him and use the funds to bring Dybala in https://t.co/76PsOQHnce

Cash in while you still can https://t.co/gMVtoZhFEq

just me who woudlnt mind? https://t.co/aA4xsy0Lmk

Anything above 35m take it.

Says allot when Lamela has done more in the last 12 months than him https://t.co/2PmNozHrBg

If we could get our money back I would sell
Too injury prone and the money could be used for Dybala who could then play behind Kane https://t.co/QgXqrqLEWc

Lo Celso has been unlucky with the number of injuries he has suffered since coming to Spurs. Fitness was hardly an issue for the midfielder before he arrived in North London and so there is no reason to believe that he cannot remain fit for a sustained length of time.

I believe the club should not even consider letting Lo Celso leave as he has not reached anywhere near his true potential. He showed enough glimpses of his quality last season for the club to persevere with him. 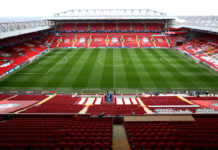 ‘A big year for him’ – Paul Robinson reacts to transfer...