Home Fan Articles Every assist partnership for Spurs in the last 10 years – Analysing...

The record-breaking partnership of Harry Kane and Heung-Min Son during the course of this season (more on that later) had me wondering about how close certain other partnerships have been through the recent history of Tottenham Hotspur.

Note – You can see the full spreadsheets from each season in the gallery at the bottom of this article.

2011/12 was very much a season of Adebayor dominance; at least in statistics. He was involved in 24 goals with a total of 8 different partners. But his most prolific partnership was with Gareth Bale. The pair racked up 7 goals involving them both, scoring against Aston Villa, West From, Chelsea, Norwich, Arsenal and Bolton. Although playing together the following season, they never registered another goal as a partnership after this season.

I certainly didn’t expect to see Jan Vertonghen feature so prominently when looking up the stats for this article, but he was particularly prolific throughout the 2012/13 season. He teamed up with Gareth Bale on 5 separate occasions throughout the season, creating goals against Man United, and both Liverpool and Swansea twice.

In the 2013/14 season, there were a total of 34 different partnerships contributing to goals, but only 6 partnerships managed to score more than 1 goal. The most prolific was the duo of Emmanuel Adebayor and Christian Eriksen, who combined for 4 goals throughout the season, scoring against Man United, Crystal Palace and Swansea in consecutive games while also scoring against Sunderland later on in the season.

2014/15 revolved around Nacer Chadli and Harry Kane in terms of a partnership, although an honourable mention has to go to Erik Lamela, who combined with both players 3 times each and narrowly misses out on top spot here. Chadli and Kane combined to score goals against Burnley, Leicester and twice against Chelsea. They would go on to combine once more the following season, Chadli assisting Harry against Crystal Palace.

Having combined for the first time during the 2014/15 season, it was the 2015/16 season that saw Eriksen and Kane truly consolidate their almost telepathic connection. They combined a total of 5 times in games against Man City, Bournemouth, West Ham, Norwich and Liverpool, starting what would become the second most prolific partnership in Spurs last ten years.

2016/17 was the first season that saw the emergence of the ‘fantastic four’ with Harry Kane, Christian Eriksen, Dele Alli and Heung-Min Son combining for a total of 34 goals when combining together. But it was again the combination of Eriksen and Kane that narrowly proved the most prolific, with a total of 7 goals. They scored against Southampton, West Brom, Stoke City (2), Crystal Palace, Man United and Hull City.

The start of the current partnership of doom; 2017/18 saw Kane and Son combine for 6 total goals throughout the season. They combined against Liverpool, Southampton, Everton, Huddersfield, Newcastle and Brighton. Harry Kane was also rather handy with Kieran Trippier, the pair combining for 5 goals, and Son also found success combining with Dele Alli, also providing 5 goals; the pair have combined a total of 16 times throughout the years.

Although Dele Alli somewhat dropped off in the 2018/19 season, Eriksen, Kane and Son certainly didn’t. Eriksen and Kane continued their brilliance with another 4 goals, combining against Chelsea, Southampton, Burnley and Bournemouth, with all of their goals coming in a 7-game period. Kane and Son also combined against Southampton, whilst also finding the net against Everton, Wolves and Cardiff.

It was a somewhat drop-off in terms of numbers for Harry Kane, not helped by his season-shortening injury, but even with that said, he still managed to combine with Son 4 times, scoring against Leicester, Burnley, West Ham and Sheffield United. Dele Alli also found himself back amongst the goals, providing 3 times each with both Heung-Min Son and Serge Aurier.

Easily the statistic that is the most unbelievable. There have been times this season where I have watched Kane and Son play together and genuinely wondered whether or not they were telepathic.

Their 14 goals in a single season currently stands at a Premier League record, and takes their total as a partnership up to 34. The 14 goals are made all the more impressive when you see that they were actually scored in just 8 different games, scoring against Burnley, Leeds and Crystal Palace (2) in 4 separate games, combining for 2 goals against Man Utd, West Ham and Arsenal, and a whopping 4 goals against Southampton. 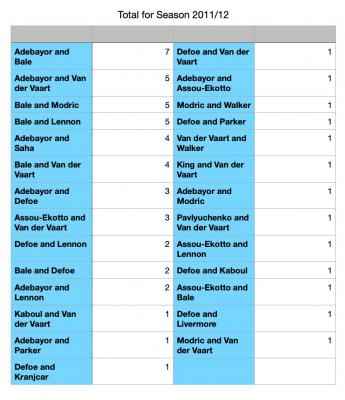