Eric Dier has insisted that Tottenham are fully behind Nuno Espirito Santo’s philosophy and the team demonstrated that against Aston Villa.

Spurs ended a run of three straight defeats in the Premier League on Sunday, with a 2-1 win over Dean Smith’s side at the Tottenham Hotspur Stadium.

Nuno had been under pressure to deliver a result after a tough couple of weeks, but he achieved that with a change of system which allowed Spurs to be more comfortable and threatening in possession.

Tottenham had to work for the points though after Pierre-Emile Hojbjerg’s strike was cancelled out by Ollie Watkins in the second half.

Fortunately, some excellent work from Heung-min Son moments later forced Villa full-back, Matt Targett, to turn a cross into his own net, which proved to be the decider in proceedings.

Spurs defender Dier has praised the way in which the team turned a tricky situation around in their favour, and added that the squad is backing Nuno’s style despite a rocky spell of form in the league.

He told the Evening Standard: “The way we reacted to the 1-1 was really important.

“We maybe could have started the second half better, it is something we still need to improve on but the reaction to the 1-1 was fantastic and we really put our foot on the gas and created a lot of chances and got the goal.

“100 per cent we believe [in the manager’s plan]. We have to keep calm. We had a tough couple of weeks under difficult circumstances.

“We were missing a lot of players, we went to Crystal Palace – injuries, sending offs, we really lost our balance there – and then we had two disappointing results.

“The Chelsea result did not reflect the game at all, we performed really well, especially in the first half and then the Arsenal game we were very disappointing.

“It’s early days, I think the performance yesterday was the best of the season and that shows a real reaction from the players. The players needed to show that reaction.

“For me, it doesn’t really matter [about the circumstances], as players we have to perform and there are some levels you can’t drop below and we definitely did last weekend and that has nothing to do with the manager.”

It was definitely a rocky patch of form for Nuno, where it looked like the players weren’t buying into his system or way of playing.

He changed that against Aston Villa, and it yielded success, despite the close scoreline. It is a big result heading into the international break, and it is definitely something to build on. 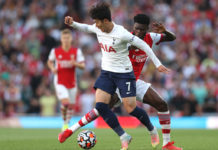 ‘Has to play every game’ – Some Spurs fans impressed with...