Tottenham Hotspur face Sporting Lisbon in the Champions League this evening as they look to climb to the summit of Group D.

Spurs come into the game off the back of a win over Marseille last week, while Sporting turned over Pot 1 seeds Eintracht Frankfurt 3-0 away from home.

Alasdair Gold believes that Conte will name a strong starting XI for the European clash, with club captain Hugo Lloris remaining in goal for the Lilywhites.

Ben Davies comes into defence after his heroic block in the dying minutes against Marseille, replacing Clement Lenglet alongside Eric Dier and Cristian Romero at the back.

Emerson Royal and Ivan Perisic retain their positions in Gold’s predicted XI, with Hojbjerg and Bentancur also remaining in the middle of the park.

In arguably the biggest talking point leading into the match, Gold has gone for a front three of Richarlison, Kane and Son, meaning Kulusevski would be forced to remain on the bench for the third game in a row. 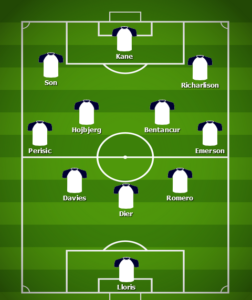 I agree with Alasdair’s predicted XI apart from the front three… I just have a feeling that Son may be rested tonight as it makes the most sense. Kulusevski does not deserve to be benched three times in a row and Richarlison is in hot form.

Opinion: Rating every Tottenham player out of 10 for season so far

William Gallas reveals who is more likely to win the PL...