The Tottenham striker ran the show against Manchester City at the Etihad, setting Son away for the opener and then adding two goals of his own.

Spurs scored in the opening minutes of the match when Kane split the City defence with a ball in behind, with Son squaring for Kulusevski to stroke the ball into an empty net.

After Pep Guardiola’s men equalised, making it 1-1 at half-time, Son was the creator again, this time crossing for Kane to cushion into the top corner.

With minutes left on the clock, City equalised again from the penalty spot, only for Kane to head home from a Kulusevski cross in the dying seconds to claim a famous 3-2 win.

Three of Kane’s former teammates took to social media to react to the win and the performance come the final whistle. 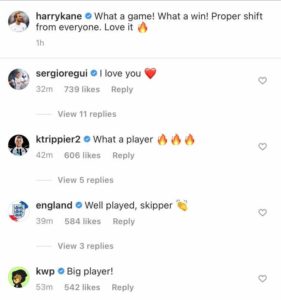 The strangest thing in football for me is that some people still don’t think Harry Kane is world-class. He is not only one of the best strikers in the world, but will also go down as one of the best centre-forwards in Premier League history.