Ray Parlour has revealed that he is still backing Manchester United to finish fourth ahead of the likes of Tottenham despite the Red Devils’ recent struggles.

The race for Champions League qualification looks to be heating up, with four clubs seemingly battling for just one place.

Arsenal look to have turned a corner under Mikel Arteta, with the Gunners currently occupying the sought-after fourth place in the table.

However, Antonio Conte’s men sit just three points behind the Gunners with two games in hand over their North London rivals.

West Ham are also showing no signs of falling away under David Moyes, currently sitting fifth with 35 points.

Ralf Rangnick has not had the start he would have hoped for to his reign at Old Trafford, with United falling to their first defeat under the German coach against Wolves on Monday.

However, Parlour admitted he is still leaning towards United clinching the fourth spot and also added that the additions the four clubs make in January could prove crucial in determining who gets into the Champions League.

The former Arsenal midfielder told talkSPORT: “If he [Rangnick] can get that little bit of a buzz around Manchester United again, they’ve got better players probably than most of the squads.

“Then you look at Spurs, I think it’s close between Spurs and Arsenal. The north London derby coming up will be massive for both sides.

“And then West Ham, you still can’t write them off. I know they had that little bit of a blip but they’ve bounced back very well against Palace and Watford.

“But it’s all about the transfer window for me, West Ham need a few more players coming in. Certainly a striker is desperate. They’ve really been dismantled at the back… whether they look at centre-half.

“A lot of it is going to come down to signings in January. Not just the top four, but at the bottom as well. If I’m going to stick my neck out, I would certainly go with Manchester United still [to finish fourth].”

At the moment, it looks like Arsenal are going to be our main rivals for fourth. However, there is still a lot of football left this season and I expect plenty more twists and turns. Despite United’s struggles over recent weeks, it would be unwise to completely rule them out of the race. 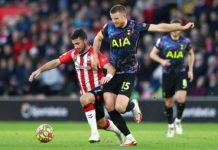 ‘You’re in there naked’ – Redknapp claims mistake was made over...

Howard Webb reveals why he wanted Ronaldo to miss penalty he...