Pierre-Emerick Aubameyang has given a straightforward three-word response to Tottenham’s appointment of Antonio Conte.

The doom and gloom that surrounded Tottenham in the final weeks of Nuno Espirito Santo’s reign has been replaced by a buzz following the arrival of Conte.

According to reports, the Tottenham players have been blown away by the Italian’s training sessions and his man-management skills.

It has even been asserted that Conte and his team have raised the standards among the Spurs staff, with everyone from the sports scientists to the analysts keen to impress them.

Spurs fans will be hoping that the 52-year-old’s arrival can help the club to bridge the six-point gap they have with Liverpool in fourth place.

Arsenal themselves will be hoping to have something to say about the race for Champions League qualification, with Mikel Arteta’s men now sitting just two points off fourth.

However, Aubameyang has insisted that he pays no heed to the Gunners’ North London rivals bringing in Conte.

When asked about what he thought about Tottenham’s appointment, the striker told Sky Sports Saturday social: “I don’t care” before bursting into laughter.

He then added: “I’ll be honest, I really don’t care. That’s not my problem. Really.”

In fairness, putting that question to Aubameyang does not make much sense as you know he will have to pretend like he does not care. However, I suspect the Arsenal players and fans are very much do care about Spurs bringing in a world-class manager. 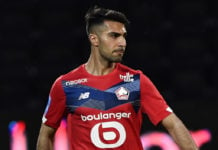 Report: Spurs-linked defender set to be made available for transfer in January

Opinion: Five players who could follow Antonio Conte from Italy to Spurs

Opinion: The three most important features of a Conte team that will improve Spurs

Opinion: Looking at whether Levy deserves some credit for Conte appointment

Report: Spurs-linked defender set to be made available for transfer in...

Opinion: Five players who could follow Antonio Conte from Italy to...

Opinion: The three most important features of a Conte team that...

Ex-England man reveals who he would take at their peak –...

Report: Spurs-linked defender set to be made available for transfer in...