Dimitar Berbatov has questioned the logic behind Tottenham’s decision to sack Jose Mourinho six days before the Carabao Cup final.

Spurs have a chance to end their 13-year trophy drought when they take on Manchester City at Wembley on Sunday.

Berbatov, who was part of the Tottenham team which won the League Cup in 2008, insisted that Mourinho deserved to be in charge for the final.

“It’s not the right moment. If they win the cup then what I’m saying is not going to be true, for sure, but in the mental way of the players, and the preparation for the game, because they will have been prepared for a long time, now sack the manager and all of this goes out of the window.

“Now you need to start and prepare for the game in six days and in my opinion [Mourinho] deserves more respect than that.

“He knows how to win trophies. He’s the guy who knows how to get into Pep’s mind so to sack him is not the respect he deserves.”

Berbatov admitted that things had not worked out for Mourinho at Spurs and but insisted that the Portuguese coach deserved to be treated with more respect for what he has achieved in the game.

He said: “Ups and downs for sure. Maybe for people more downs, not only in the results but in the way the team was playing. Maybe they’re going to say stuff like this.

“Of course Mourinho is always going to have his doubters but people forget that he won so many trophies in his career and I think he deserves more respect.

“Yes, in the last years he had some problems coming from the ways he managed the teams but nevertheless it doesn’t erase what he has done in football.

“As players going into a difficult period in his career, so the managers do. That’s what surprised me is that it’s not the right way to sack him, before the final.

“However, probably the majority of the Spurs fans are going to be happy because I read what they talk about and some of them didn’t like the way the team was playing, so now here we go, the next one, the next manager is going to have a chance to upgrade the team.”

The trade-off between playing attacking football and winning trophies came to the spotlight during Mourinho’s 17 months in charge.

While the 58-year-old’s counter-attacking style of football was not in keeping with the club’s traditions, Spurs fans were seemingly willing to accept it as long as the club appeared to be in the title race.

However, the team’s struggles to get results over the last few months saw many lose patience with the pedantic style of play.

When asked about Mourinho’s style of play not sitting well with the Tottenham faithful, Berbatov responded: “Now when you mention it, and I’m thinking back, I remember how (laughs) even when we lose the game 3-2, 4-3 or even 5-4 when you get these crazy results, the fans were happy.

“I was sitting at home, reading the newspaper, and we’ve lost the game 4-3 for example and I’m cursing and I want to smash things around. How can you be happy with that? You know?

“Obviously they appreciate the beautiful game of football. Attack, attack, attack. It doesn’t matter. Let’s attack and cross and make something worth watching so my kids can go home and copy you.

“Maybe that’s stayed all of these years, maybe it doesn’t change in the fans. It’s great because it’s how I see football as well but sometimes, especially when it comes down to finals or the road to the final, there are games when you need to be more practical and say we’re going to play ugly today, boring, maybe you’re going to fall asleep during the game but in the end it’s about the result.

“Winning 4-3, 6-0 winning or 1-0 winning all brings you three points in the end. It’s the same but obviously with Spurs, it’s always stayed the same with the fans want to watch attacking football.”

Despite the controversial manner in which he left Spurs, Berbatov showered praise on Daniel Levy, insisting that the Tottenham chairman has nothing but the club’s best interest at heart.

The Bulgarian added: “I can assure them that from my personal experience of dealing with Daniel Levy, he puts the team first. Have no doubt about this, honestly.

“I can tell you that he puts the team first, he is going to make everything that he thinks is right for the club.

“Spurs have the best stadium in Europe, the best training ground in Europe and it’s all down to Daniel Levy’s investment in stuff like this. Also, on paper the team has better players than when I was there, for sure.

“Of course some could argue and say ‘yeah but where is the (swears) trophy?’. They have a point. Then what do you say? Pochettino was there and almost won the Champions League, almost.

“Then Mourinho, the guy who is renowned for winning trophies, didn’t do anything, although he had the chance in six days. Maybe he was going to win it.

“In the end I can see why they are blaming Daniel Levy because he is always there, he is the constant, but also the players need to take into account their own actions on the pitch.

“That’s for sure. First and foremost look at yourself and say ‘wait a minute, Berba, we didn’t do 100 per cent of everything we can do’. Everybody needs to look at themselves and ask whether they performed at the best of their ability. That’s very important.”

If reports suggesting that the Tottenham dressing room was ‘split’ regarding Mourinho are true, then it is possible that Levy thought that the team had a better shot of overcoming Manchester City without the 58-year-old in charge. The Spurs chairman will be hoping that Mourinho’s sacking will bring the squad together and produce a bounce. 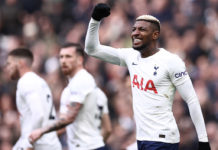