After failing to add a single player in the last two transfer windows, Tottenham Hotspur seem to be competing for the best players in Europe this summer.

The club have already shattered their transfer record to sign Tanguy Ndombele from Lyon and reports in the press indicate that the Lilywhites are also interested in bringing in Giovani Lo Celso from Real Betis (Diario de Sevilla) and Paulo Dybala from Juventus (La Stampa).

Now, another one of Europe’s brightest talents, Joao Felix has opened the door to a move to Spurs sometime in the future.

The 19-year-old, who moved from Benfica to Atletico Madrid this summer for a fee of €126 million (according to Transfermarket.com) recently held a question and answer session with Bleacher Report where fans were invited to pose their questions to the attacking midfielder. 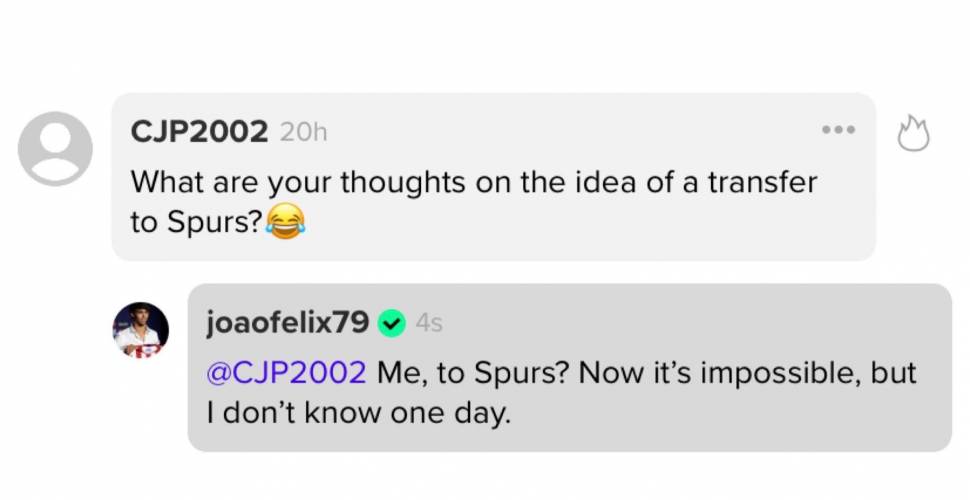 In the session, the young forward was asked what other league he would like to play in to which he said: “Premier League.”

Another fan also asked Felix if he fancies a move to Spurs. He responded: “Me, to Spurs? [Right] now that’s impossible, but I don’t know, [maybe] one day.”

It’s clear that Felix wasn’t all that serious about his answer. However, it shows how far Tottenham Hotspur have come in the last few years that top quality players seriously consider Spurs as an option. Who knows? Maybe the Portugal international will one day play his football for the white half of North London.

Pundit claims interview could be ‘a sign’ that Spurs star will...