Home News Fabrizio Romano reveals how many players Spurs are expected to sign in...
10
SHARES
ShareTweet

Fabrizio Romano has revealed that Tottenham Hotspur are expected to sign at least two players in the January transfer window.

Tottenham’s form has improved significantly since Antonio Conte’s arrival at the start of November, with the club now pushing for an outside chance at the top four.

However, the Spurs head coach made it clear in his press conference on Thursday that he feels there is still a gap in terms of quality between the Lilywhites’ squad and the best teams in the Premier League.

He further revealed that he has completed his evaluation on the Tottenham squad and is waiting to have a meeting with the club’s hierarchy to share his input on what additions they need.

Football.London reported this week that the Lilywhites are expected to target a right-wing-back, a left-sided centre-back and a striker in January.

Romano has now revealed that Conte wants at least two players brought into the club next month. The journalist added that the North Londoners may also cash in on Steven Bergwijn.

Romano told Skrill: “In the Premier League, an important January is expected for Tottenham.

“Definitive decisions have not yet been made, but Steven Bergwijn could be sold and the idea is to buy at least two new players.”

I would be surprised if Bergwijn is sold in January given the lack of forwarding options that Conte has at his disposal. If we make two signings, one would expect a striker and a centre-back to the club’s priority next month.

‘For sure’ – Conte reveals thing that disappointed him about Spurs formation 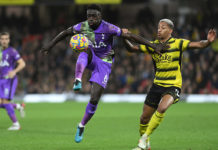 Report: Napoli could make a move for ‘low-cost’ Spurs defender in January

‘Not being disrespectful’ – Pundit disagrees with Conte statement about Spurs star

‘For sure’ – Conte reveals thing that disappointed him about Spurs...

‘We have to improve’ – Conte reveals whether Spurs deserved win...

Pundit claims on-loan Spurs man could push for a place in...

Report: Napoli could make a move for ‘low-cost’ Spurs defender in...

‘For sure’ – Conte reveals thing that disappointed him about Spurs...