Home News Former Spur reveals the facts over Harry Kane’s absence and when he...

Former Tottenham Hotspur defender Paul Miller has taken to Facebook to set the picture straight over his understanding of Harry Kane’s situation at the club, as reported on Twitter by journalist Kevin Palmer.

Miller, who played for the North Londoners over a ten year period between 1977 and 1987, winning the UEFA Cup in the process claimed that Kane and his family stayed at Tottenham owner Joe Lewis’ resort in the Bahamas with the full understanding of the club.

Miller suggested that Kane was not expected to report back until Friday of last week, with the plan to commence training on Saturday.

The 28-year-old did indeed begin training on Saturday in isolation away from his team-mates, following his holiday.

Kane is in contention to face Manchester City on Saturday, according to the 61-year-old and revealed his hope that the club would have rewarded him with a new contract before facing the Premier League champions.

Reliable journalist Alasdair Gold admitted during the latest episode of the Gold and Guest Talk Tottenham podcast (36:00) that there are noises coming out from within Kane’s camp that he could sign a new deal to extend his stay at his boyhood club. 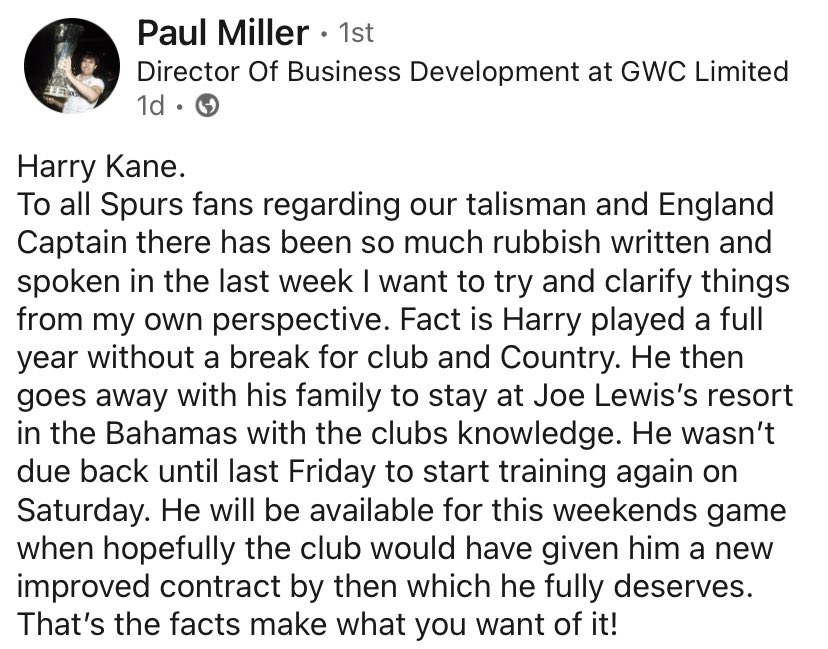