Antonio Conte has admitted that Tottenham dipping into the January transfer market may not solve the squad’s problems straight away and suggested the club should only sign suitable players if the opportunity arises.

The Italian was left disappointed on his return to Stamford Bridge when his Tottenham side was beaten 2-0 by Chelsea in the Carabao Cup semi-final first leg.

Conte made just two changes to the side that beat Watford on New Year’s Day, but quickly had an uphill battle on his hands when Kai Havertz slotted in after five minutes after Marcos Alonso intercepted a sloppy pass from Japhet Tanganga.

Spurs were second best in the early stages against the Blues and found themselves two goals down on 35 minutes when Tanganga’s clearance cannoned in off team-mate Ben Davies, leaving Hugo Lloris powerless to stop the own goal.

With the bar for improvement low for Spurs, the visitors looked somewhat coherent in the second half and looked to claw their way back into the game.

However, Chelsea were satisfied with their healthy cushion heading into next week’s second leg and fended off Spurs’ search for a consolation.

Although it was a close to full strength Spurs outfit, the defeat will have handed Conte a further idea of what he needs to do to improve his side going forward.

But with the transfer window now officially open, the former Inter Milan boss played down the notion that signings in January will lead to a direct upturn in performances.

He said (via Football.London): “I need to be very clear that if we think the January transfer window we can solve the situation I’d be telling you a lie. There is a lot of a job to do. If someone thinks the transfer market can solve it.

“First of all it is a very difficult window in January and if it’s the right players are out there. It’s about opportunities and if the opportunity arises that the club thinks can help the squad.

“I don’t see in the transfer window the resolution of our problems. Our solution is to work and fix a lot of the aspects of this squad. To think that to buy one or two players to solve it is not right.”

It is clear that there are areas in the Spurs squad that need big improvements, but Conte is right in saying that January signings won’t necessarily equal an immediate rise on a consistent basis. But, that is not to say that the club shouldn’t make any heading into the rest of the season. 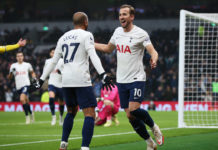