Tottenham Hotspur first-team assistant coach, Joao Sacramento has taken to social media to congratulate Dane Scarlett, who created history by becoming the youngest player to appear for Spurs in the Premier League during their 2-0 win over West Brom on Sunday.

Jose Mourinho admitted after the game that he wanted to be the one who handed the teenager his debut as he believes that the striker will go to the very top.

Ledley King took to social media after the game to praise the youngster on making his Premier League bow and urged the teenager to watch and learn from Harry Kane’s example.

Sacramento has now taken to Instagram to hail Scarlett and asked the Tottenham academy star to keep working hard at his game. 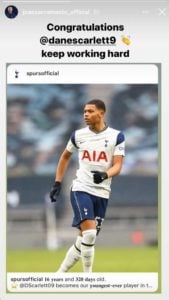