Harry Kane scored his fourth goal of Euro 2020 after England progressed into the final with a historic extra-time win over Denmark last night.

It has ended England’s 55-year-wait to participate in a final during a major tournament, dating back to the infamous 1966 World Cup win.

Kane came under criticism during the group stages for his poor performances and failing to find the back of the net, but the striker has hit form during the knockouts: scoring four goals in three games.

England legends, John Terry and David Beckham, sent messages out to Kane on their Instagram accounts last night after the incredible victory, with Kane scoring the match-winning goal.

Terry posted this on Instagram: ‘Love it Captain and well done tonight boys. Rest up and get ready to go again Sunday.’

Kane is grabbing all the plaudits for his performances and will now be preparing for the final against Italy on Sunday, dreaming of lifting the European Championship trophy. 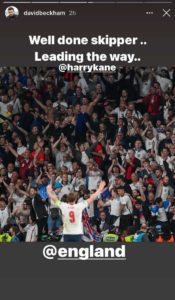 Kane’s tough start to the group stage was tough to watch for every Spurs fan. It felt like the whole country was on his back, but Kane has done what he has done his whole career – prove people wrong. He’s now getting plaudits from legends such as Terry and Beckham and he’s about to lead his country out to a major final.

Report: Club may have to give up pursuit of Spurs player due to domestic squad rules

‘Kept saying to myself’ – Chelsea star admits he tried to...

‘He told me’ – Chelsea icon shares what Conte told him...

Report: Club may have to give up pursuit of Spurs player...

‘Kept saying to myself’ – Chelsea star admits he tried to...