Son, 29, enjoyed a stellar campaign under Antonio Conte with his performances helping to lift his side into the group stage of next season’s Champions League for the first time since 2019-20.

A double on the final day in Tottenham’s 5-0 drubbing of Norwich ensured he tallied a career-best 23 goals which matched the number also set by Liverpool forward Mohamed Salah.

With the pair eventually sharing the title of top scorer, Son later reflected on his success with a post on Instagram thanking his Spurs colleagues and supporters for helping him along the way.

And Wimmer, who was Son’s teammate at Tottenham and one of his closest friends, sent a message to the South Korean star congratulating him on the achievement – ‘Bravo Brother’. 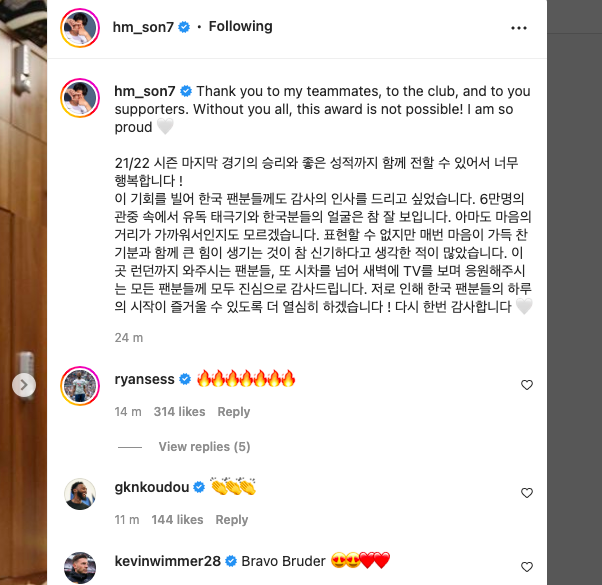 Wimmer joined Tottenham in 2015 and made just 31 appearances in two seasons in England (Transfermarkt).

The 29-year-old now plies his trade with Austrian side Rapid Vienna and had the chance to potentially face Spurs this term when both sides were drawn against each other in the Europa Conference League (BBC Sport).

Wimmer had a great relationship with Son during his short time at Spurs and that could be down to both of them joining the club at similar times.

It is nice to see that they have kept their friendship going with that Instagram interaction congratulating the Spurs star on his achievement this season.