Sky Sports journalist Kaveh Solhekol has heard that AS Roma are not looking to sign Tottenham midfielder Tanguy Ndombele this month.

After Ndombele was booed by Tottenham fans for ambling off slowly when he was substituted against Morecambe on Sunday, reports have emerged indicating that Spurs are looking to move the midfielder on this month either on loan or a permanent deal.

Over recent days, sources have claimed that Napoli have expressed interest in signing the Frenchman on loan.

It has also been alleged that former Tottenham boss Jose Mourinho wants to reunite with the former Lyon man at AS Roma and has spoken to the midfielder about a potential move to the Stadio Olimpico.

However, this has been contradicted by Football Italia, who suggested this week that Serie A clubs are not in a position to afford the midfielder’s wages.

Solhekol has now poured water on the speculation linking Ndombele with a move to Rome.

The journalist told the Transfer Show on Sky Sports (12/01/22 at 5:30 pm): “There has been a lot of talk in the last few days that Ndombele could be leaving Spurs. Maybe out on loan.

“There has been talk in Italy that Napoli could be interested in signing him. Roma, managed by the former Spurs boss, Jose Mourinho.

“The latest information we have as far as Roma are concerned is Ndombele doesn’t fit the profile of player they are looking for, at the moment.

“I think they are looking to make another loan signing. But we are being told that it’s unlikely to be Ndombele.”

Spurs would only be able to loan out Ndombele is if they agree to subsidise a significant portion of his wages. I suspect that the North Londoners will have little choice but to do that as the only way they would be able to find a buyer for the 25-year-old in the summer if he impresses out on loan in the second half of the campaign. 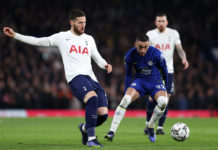 ‘I’m told’ – Journalist reveals what he has heard about Spurs...

‘No disrespect to them’ – Ashley Cole questions quality of Spurs...