As the preparations for Saturday’s Champions League final begin to ramp up, Liverpool’s team bus was pictured in a comic mix up earlier today.

While the Liverpool squad itself will not arrive in the Spanish capital until Friday, the Reds’ team bus was seen to be stuck in a tunnel that runs underneath the Wanda Metropolitano, the home of Saturday’s final.

The Sun reported that confused onlookers questioned how the incident could have occurred, asking: “This makes no sense, how could the front of the bus get through when it is higher than the back of the bus?”.

While one spectator joked that this was “A great start for Tottenham”.

The Liverpool squad will face a similarly sticky task in Saturday’s game in Madrid. A full Spurs squad is scheduled to arrive in Madrid two days before Liverpool and judging from the photos released by the club the boys look raring to go (Tottenham Hostpur).

Spurs fans will be hoping that this will be the first of many Liverpool mishaps ahead of the game on Saturday. It certainly is good to see that Liverpool are taking Spurs seriously, parking the bus a whole three days before the game kicks off. 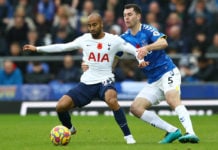