Paul Merson has claimed that Harry Kane does not trust Tottenham midfielders Oliver Skipp, Pierre-Emile Hojbjerg and Giovani Lo Celso to provide him with enough opportunities to score.

The England captain is yet to find his best form for Spurs this season and sits on just a single Premier League goal after nine appearances.

His only tally came in the 3-2 win against Newcastle three weeks ago, which was Nuno Espirito Santo’s final league victory in charge of the club before being relieved of his duties.

Kane often looked isolated and disinterested under the Portuguese coach and never looked close to having the desired impact on games like he did on so many occasions last season.

Although Spurs do have the talent and squad depth to stamp their authority on games, Merson believes Kane is not convinced the midfield behind him is good enough to generate chances for him, which is why he has been so isolated.

Merson told Sky Sports: “You are only as good as the players that provide you. I don’t care who you are.

“The players he has got behind him, no disrespect, in [Oliver] Skipp, [Pierre-Emile] Hojbjerg and [Giovani] Lo Celso, they aren’t put the ball through the eye of the needle. They are holding midfielder players.

“They’re not Christian Eriksen – I understand where Harry Kane is coming from. He is dropping off. He doesn’t trust the players that are playing in midfield. I am sorry, he doesn’t and he’s not getting the service.

“It’s okay saying ‘staying in the box’. But they have to get up the pitch first.”

Kane has looked very isolated and not involved at all for Spurs this season, and it could be a mix of mental issues and structural problems to do with the squad.

Now Antonio Conte is here, hopefully, he can restructure the team to provide a more stable core, which will in turn help Kane out. 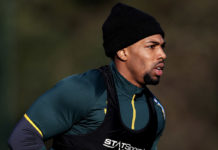 Journalist suggests why Adama Traore could be stalling on Spurs move

Report: Study finds Tottenham are losing out on £165,000 per home game

Journalist suggests why Adama Traore could be stalling on Spurs move