Nuno Espirito Santo has provided an update on South American trio, Giovani Lo Celso, Cristian Romero and Davinson Sanchez ahead of the London derby against Chelsea this weekend.

All three of the aforementioned players missed the embarrassing 3-0 defeat to Crystal Palace last week, as well as the 2-2 draw with Rennes in the Europa Conference League on Thursday.

However, Nuno confirmed the trio would arrive back in London on Saturday, 24 hours before Spurs welcome Chelsea at the Tottenham Hotspur Stadium.

He revealed that the three players had been working hard in Croatia and would be involved in one full training session with the first-team before he and his staff can assess them properly.

Lo Celso and Romero were caught in the middle of a dramatic match in Brazil during the international break when health officials called a halt to the game, claiming the Spurs duo had entered the country without quarantining.

The Argentines then linked up with Sanchez in Croatia for a training camp rather than returning to the UK and having to self-isolate for ten days.

On the returning trio, Nuno said (Football London): “They arrive Saturday and they have a training session in the afternoon.

“If they are available and fit, they are working hard in Croatia with the sports science [staff member], it’s not the same but due to circumstances we have to assess them properly.

When asked if they would have a full training session with the team, he added: “Yes, yes, yes. Of course, we anticipate the situation to be able to join all the group together in the afternoon.”

“It’s been hard because absences are always a problem. It requires adaptation but hopefully, they return Saturday and we can look forward normally.”

I expect at least one of the three to be involved against Chelsea from the start, with the others on the bench. The squad is too thin to leave them out this week. 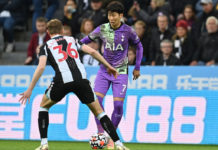