Jamie O’Hara has claimed that Tottenham can still salvage something from their Carabao Cup semi-final tie against Chelsea despite their poor performance in the first leg defeat at Stamford Bridge.

Spurs were second best in London on Wednesday night and will need to erase a 2-0 deficit heading into next week’s second leg at the Tottenham Hotspur Stadium.

Antonio Conte’s side fell behind after just five minutes after a poor pass from Japhet Tanganga was cut out by Marcos Alonso, who slipped in Kai Havertz to drive past Hugo Lloris via a big deflection off Davinson Sanchez.

Matters were made worse on 35 minutes when Tanganga was involved again, heading a free-kick off team-mate Ben Davies, with the rebound ricocheting back past a helpless Lloris into the corner of the Spurs net.

Conte altered the formation with the introduction of Tanguy Ndombele for the second period, but still couldn’t find a breakthrough despite having more of an attacking impetus about them.

Former Spurs midfielder O’Hara branded the overall performance as ‘shocking’ but emphasised there is still something in the tie for the North Londoners despite the two-goal deficit.

He also praised the quality of Chelsea, citing Thomas Tuchel’s side as a mould for Spurs to learn from going forward.

Speaking on talkSPORT, O’Hara said: “It was a poor performance. You know what, it was a shocking performance.

“It is only half-time. We lost the game 2-0 but we’re still in the tie. We’re still in it. We can still claw it back.

“The performance tonight was shocking and again we’ve shown that the players just aren’t good enough to play for Spurs.

“But Chelsea…you look at their side and how good are they? That’s the level we’re trying to get to. They’re Champions League winners and we got outclassed.”

Even though it was a poor display all around, you can’t help but feel there is still a chance heading into the second leg. Chelsea haven’t exactly put the tie away and they really should have done that already, but Spurs will need to produce something much better to reach the final. 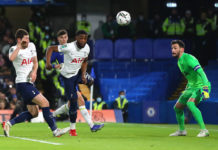 ‘Only half-time’ – Pundit claims some Spurs players are not good...

‘The level of Tottenham has dropped’ – Conte makes honest assessment...