Let’s be honest, Tottenham and Arsenal are not going to join forces any time soon. However, with the North London Derby coming up tomorrow, we wanted to take a look at what the dream combined XI would be.

Both sides have been hit and miss defensively this season but, apart from a slight dip last month, Hugo Lloris has been in inspired form since Mourinho came to North London.

Right-back is certainly a weakness for both Spurs and Arsenal but, while Bellerin has regressed over recent campaigns, Serge Aurier has taken his game to a new level this season.

In the centre of defence, Toby Alderweireld remains the experience head that every manager needs.

Although Davinson Sanchez has seen an uptick in form of late, we have given the nod to Arsenal’s Gabriel for some of his offensive and defensive performances this year.

At left-back, Sergio Reguilon has been one of the most potent assist kings in the Premier League this season, edging out worthy competition in Kieran Tierney.

Pierre-Emile Hojbjerg and Tanguy Ndombele have had the midfield on lock this season and few Arsenal midfielders would even push them close. A fully fit and firing Thomas Partey may have a case, but he hasn’t quite hit the ground running this season.

We have shifted Gareth Bale into the number ten role to accommodate our attack, with Harry Kane and Heung-min Son beyond him – it would be a shame to split them up.

However, there has to be a place for Bakayo Saka who has been incredible this season. The one player I am actually jealous that Arsenal have on their books. 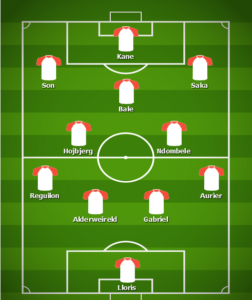 Report: Spurs ‘stepping up their attempts’ to sign 23-year-old

Opinion: Four reasons why Spurs fans need to be patient with Bryan Gil

Report: Spurs ‘stepping up their attempts’ to sign 23-year-old

Opinion: Four reasons why Spurs fans need to be patient with...

“I don’t know if he will stay” – Team-mate responds about...