Tottenham Hotspur and Aston Villa go head-to-head this weekend in the Premier League so we wanted to take a look at a potential dream combined XI if everyone was fit.

In goal, the experience and talents of Hugo Lloris just about edge out a worthy challenge from Emi Martinez. In the centre of defence, we stay as far away from Tottenham as possible and opt for a solid duo of Tyrone Mings and Ezri Konsa.

At left-back, Sergio Reguilon stands out as the obvious choice, although Matt Targett has been impressive this season. At right-back, Matt Cash may feel hard done by but I really want to see Tanganga given a chance due to his immense talent.

In the centre of midfield, the dynamic duo of Pierre-Emile Hojbjerg and Tanguy Ndombele speaks for itself.

Jack Grealish, of course, starts in this team playing off the left side, while Son switches over to the right. Harry Kane drops into a number ten role and Ollie Watkins leads the line as the high-press and pacey centre-forward. 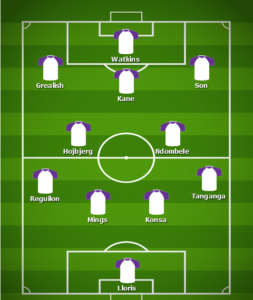 Journalist reveals Spurs and Barcelona have made enquiries for defender

Journalist reveals Spurs and Barcelona have made enquiries for defender