Tottenham and Chelsea face off in a huge clash in the top four race this week so we wanted to take a look at a possible combined London XI from the two fierce rivals.

We gave Hugo Lloris the nod between the sticks – apart from his mistakes against Liverpool, the Frenchman has been a rock at the back and has far more experience than Chelsea’s Mendy.

At centre-back, we decided to take one from each team, with Thiago Silva walking into the XI and Joe Rodon getting the nod as the silver lining to the Spurs defence of late.

At right-back, Reece James nips in ahead of Serge Aurier due to recent events, while Sergio Reguilon gets in ahead of Ben Chilwell for his impressive debut Premier League season.

Central midfield needs no explanation with Pierre-Emile Hojbjerg and N’Golo Kante keeping things locked up for the combined XI.

Tanguy Ndombele edges out Mason Mount for the creative role, although Christian Pulisic gets the nod on the right-wing ahead of Steven Berwijn.

Despite the acquisition of Timo Werner, few could argue with having Harry Kane and Heung-min Son as the two main goal threats in the side.

What would you change? Let us know in the comments! 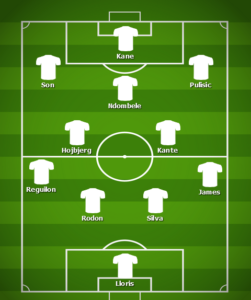