Tottenham Hotspur and Liverpool go head to head in North London on Thursday so we wanted to take a chance to look at the current squads and choose a combined XI.

For the purposes of this XI, we have chosen from players who are currently fit and have been performing well of late.

Between the sticks, although Lloris has enjoyed superb season, we have to go with the man who is arguably the best keeper in the world right now, Alisson.

At right-back, with the severe drop off in form of Trent Alexander-Arnold and the contrasting rise in stocks of Serge Aurier, the Ivorian takes the spot.

At left-back, Andy Robertson eases Sergio Reguilon out of the way purely based on how the Scottish defender players every game, while the Spaniard is rotated out a lot.

In central defence, we have taken one from each team. While Dier has his critics, he has been a mainstay in that Spurs defence this season. Meanwhile, Fabinho has been a rock at the back for Liverpool amidst their injury crisis.

In central midfield, we have opted for an enforcer and a deep-lying playmaker partnership in Pierre-Emile Hojbjerg and Thiago. That speaks for itself.

In the number ten role, few are in better form than Tanguy Ndombele at the moment. Furthermore, the Frenchman will have Harry Kane, Heung-min Son and Mo Salah to pick out in attack! Scary stuff. 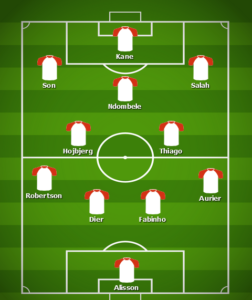 Report: What some of Spurs board think about Levy relationship with Mourinho

Agent reveals Spurs offered over £50m for winger in 2018

Report: Club are being criticised for allowing player to join Spurs last summer

Report: What some of Spurs board think about Levy relationship with...