Tottenham Hotspur and Manchester United go head to head this weekend in the Premier League, but what would a combined XI look like between the two sides?

We have gone for Hugo Lloris between the sticks purely because it seems up in the air as to who holds the number one jersey at Old Trafford at the moment.

In the back four, it was hard to make a case for any Tottenham players. Despite Sergio Reguilon’s incredible debut season, Luke Shaw has arguably been the best left-back in the league.

At right-back, Aaron Wan-Bissaka gets the nod by default due to Spurs’ problems in that area, although he is also a worthy contender.

In the centre of defence, we have gone for Harry Maguire as he is one of the first names on the United team sheet these days and Joe Rodon as the one shining light in the Spurs defence.

In central midfield, Tanguy Ndombele and Pierre-Emile Hojbjerg edge out their Man United counterparts, although Bruno Fernandes starts in the number 10 role.

Up front, few could argue with a trio of Heung-min Son, Marcus Rashford and Harry Kane. 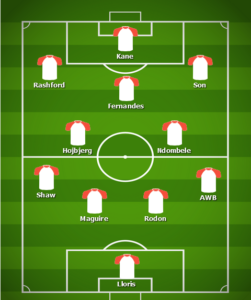 Fabio Paratici reveals why he is so animated when watching Tottenham

Fabio Paratici reveals why he is so animated when watching Tottenham

National boss explains why Spurs summer signing is a example for...

Spurs defender reveals he ‘had to rush’ to Hotspur Way on...