Tottenham Hotspur are in need of a rebuild and with that comes new players. I’ve been having a think about what kind of starting line-up I would love to see in N17 next season and this is what I came up with.

Disclaimer: This is more of an ideal scenario. There are realistic signings in here, but there are also some dream ones.

Between the sticks, Hugo Lloris bid farewell to the club in the summer to return to France and link up with Pochettino at PSG. To replace him, Spurs shelled out £30m for the ever-reliable Nick Pope from Burnley.

Pope has been one of the best keepers in the Premier League for a few years now, and that comes in a side that come under constant defensive pressure. Not to mention, he is homegrown.

At left-back, Sergio Reguilon remains at the club, while Joe Rodon takes a first-team spot after impressing in 2020/21.

Alongside Rodon, Spurs went out and signed Joachim Andersen from Lyon. He impressed on loan at Fulham last season and gives me real Alderweireld vibes. The Belgian was on loan at Southampton the year before Spurs signed him from Atletico.

On the right-hand-side of defence, Spurs manage to bring in the promising Max Aarons despite Norwich’s promotion. This, in reality, would be a very difficult signing. However, perhaps Spurs could include Tanganga on loan as part of the deal.

In midfield, Pierre-Emile Hojbjerg and Tanguy Ndombele continue to boss it, with Oliver Skipp returning from loan and slotting straight into the side.

Up top, Harry Kane and Heung-min Son remain, this year partnered by the left-side playmaker of… Jack Grealish! Spurs manage to sign him without the aid of £3m plus Josh Onomah!

In truth, this is a near-impossible signing for the Lilywhites. Grealish would cost around £100m these days. However, we can dream – perhaps the likes of Dele Alli and Harry Winks could be used in a player-plus-cash deal. 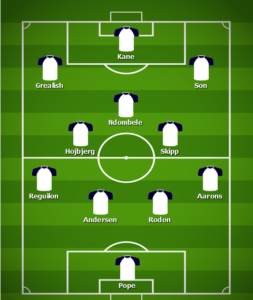 Opinion: Looking at whether Spurs should sign Carlos Vinicius this summer

Report reveals what Harry Kane has told friends about his Spurs...