Despite Man City vs Tottenham being called off this weekend, we wanted to take a look at what a combination of Conte’s Spurs and Pep’s Citizens would look like on current form.

We start with perhaps a controversial one, opting for Hugo Lloris over Ederson at the back. Yes, Ederson has a far better range of passing, but if you want a keeper who is likely to earn you the most points over a season from their shot-stopping, I don’t think any are better than Lloris over the past two years in the Premier League… especially with the attacking line-up we are going to name.

At the back, we have gone for one from each team, with Ruben Dias lining up alongside Cristian Romero. One solid and sensible defender and one aggressive pitbull – the perfect match.

In the full-back positions, seeing as we are going with a back four, we have opted for Joao Cancelo and Kyle Walker. After all, we will likely need their pace in behind with the lack of midfield cover.

And in central midfield, we of course have the talented Kevin De Bruyne, but his usual partner has changed to Pierre-Emile Hojbjerg. While Man City have so many talented holding midfielders, including Rodri, in this XI we thought we needed someone more mobile who can do the running/work of two players. That has been Pierre this season.

In attack, we have Heung-min Son on the left, Phil Foden on the right, and Harry Kane playing the number ten role, all providing goal threats of their own and creation for Man City’s new signing, Erling Haaland.

This feels like a chaotic team that would concede a lot of goals… but boy would they score some. 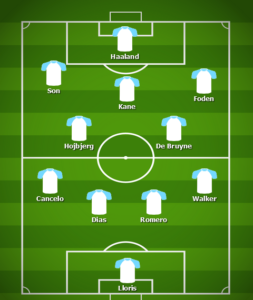 ‘Madness’ – Jenas admits to being awestruck by one Spurs teammate