Tottenham Hotspur take on Championship side Brentford in the Carabao Cup semi-final tomorrow night and we believe that Jose Mourinho will look to make three changes.

We think that Hugo Lloris will remain between the sticks, despite Joe Hart having been used in some of the earlier rounds.

Sergio Reguilon returns at left-back despite his misbehaviour over the past two weeks, with Serge Aurier also returning on the right-hand side.

Eric Dier and Toby Alderweireld remain in the centre of defence, with the FA Cup game against Marine at the weekend representing a better chance to rest them.

Harry Winks and Pierre-Emile Hojbjerg remain in the central midfield positions after quality performances against Leeds in the Premier League on Saturday.

Tanguy Ndombele also returns to the creative midfield position, with Giovani Lo Celso still out injured for the Lilywhites. 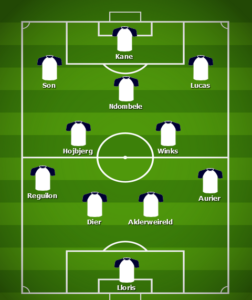