Tottenham Hotspur face a home match against Burnley this weekend in the Premier League as they look to bounce back from their wretched recent form.

We believe that Hugo Lloris will be recalled between the sticks for the game at the Tottenham Hotspur Stadium.

Eric Dier and Davinson Sanchez partner up once again at the heart of the defence, with Sergio Reguilon at left-back and Serge Aurier returning from injury at right-back.

Pierre-Emile Hojbjerg represents the main defensive holding midfielder, with Tanguy Ndombele alongside him to offer more creativity and drive.

Erik Lamela continues to be rewarded for his positive form as he starts in the number 10 role, with Dele Alli still waiting for his chance in the starting XI.

However, one man who has been gifted a spot in the line-up due to recent Europa League performances and Premier League cameos off the bench is Gareth Bale.

The Welshman lines up alongside Harry Kane and Heung-min Son in attack for Spurs. 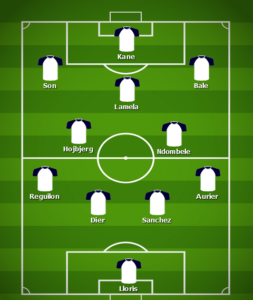 Report: European club are ‘calm’ about Tottenham’s interest in forward