Tottenham Hotspur welcome Chelsea to North London later this afternoon and will be looking to bounce back from their woeful 3-0 defeat against Crystal Palace.

It’s a hard team to predict this week due to the number of injury doubts and the South American trio returning from Croatia.

We believe that Hugo Lloris will start between the sticks, with Emerson Royal and Sergio Reguilon retaining their spots in the starting XI.

However, Eric Dier recovers from injury in time to partner the returning Davinson Sanchez in the heart of defence, with Cristian Romero on the bench.

In the engine room, Oliver Skipp and Pierre-Emile Hojbjerg line up as usual, with Tanguy Ndombele in there as a more creative outlet just ahead of them. Giovani Lo Celso returns to make the bench.

Heung-min Son returns in time to take up his position on the left-hand side while Dele Alli is pushed forward into a front three. As usual, Harry Kane leads the line for Spurs. 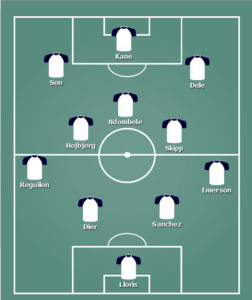 Pundit reveals why he thinks Spurs performance was shocking for Newcastle