Tottenham Hotspur face a tough London derby against a new-look Chelsea side on Thursday, with Thomas Tuchel recently taking the reigns at Stamford Bridge.

The Blues’ uptick in form has contrasted the recent Spurs woes with back-to-back defeats against Liverpool and Brighton.

We believe that Jose Mourinho will start the match with Hugo Lloris between the sticks. Joe Rodon and Toby Alderweireld also keep their spots in the centre-back positions.

Ben Davies lines up at left-back, with Moussa Sissoko continuing to cover at right-back for the Lilywhites.

Pierre-Emile Hojbjerg and Harry Winks partner in the centre of the pitch, with Tanguy Ndombele serving as the main creative force in the midfield.

In the absence of Harry Kane, Carlos Vinicius is given a rare chance to shine in the Premier League after impressing in the second half against Brighton at the weekend.

Heung-min Son and Steven Bergwijn provide support on either side of the Brazilian striker. 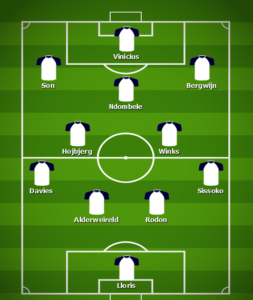