Tottenham Hotspur face a trip to Crystal Palace this weekend as they look to extend their 100 per cent record in the Premier League.

We believe that Nuno Espirito Santo will change up his system and personal amidst a bit of an injury crisis this weekend, switching to a back five.

Hugo Lloris lines up between the sticks, with Sergio Reguilon playing left-wing-back and Ben Davies tucking in behind him. Eric Dier sits in the centre of defence, with Japhet Tanganga at right-centre-back and new signing Emerson Royal at right-wing-back.

In the middle of the pitch, Oliver Skipp passes a late fitness test to make the XI, lining up alongside Pierre-Emile Hojbjerg and Dele Alli as he has done in all three previous Premier League matches.

Up front, in the absence of Heung-min Son, Harry Kane leads the line with Lucas Moura providing support. However, this could become a front three with Bryan Gil if Skipp is unable to start the match. 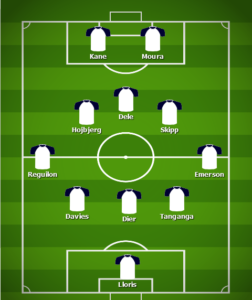 Report: Spurs target in his ‘last months’ at club, set for ‘international auction’

Report: Nuno waiting on defender’s fitness ahead of Newcastle clash

Report: Spurs target in his ‘last months’ at club, set for...

Report: Nuno waiting on defender’s fitness ahead of Newcastle clash

‘Nothing going on’ – Fabrizio Romano sheds light on ‘atmosphere’ around...