Tottenham Hotspur face Croatian side, Dinamo Zagreb, in the Europa League Round of 16 this week, with the first leg to be played in North London.

We believe that Hugo Lloris will start between the sticks for the Lilywhites, with a central defensive duo of Eric Dier and Davinson Sanchez. Alderweireld drops to the bench.

Ben Davies comes back in at left-back and Serge Aurier starts on the right-hand side of defence, with both Sergio Reguilon and Matt Doherty rested.

Pierre-Emile Hojbjerg takes up a rare spot on the bench, with Tanguy Ndombele and Harry Winks starting in central midfield.

Dele Alli is handed another start in a Tottenham shirt since his return to the matchday squads, with Erik Lamela starting on the right and able to drift into central positions.

Heung-min Son starts on the left to add some firepower to the attack, while Harry Kane is benched and Carlos Vinicius gets a rare start up front. 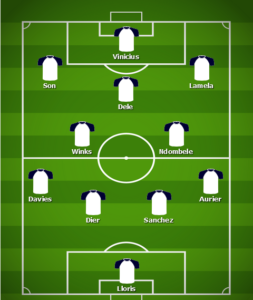 Report: Arsenal tried to sign Spurs-linked winger for just £3.5m in the past