Tottenham Hotspur face an away trip to Fulham this week for a Premier League London derby as they look to kick-on from that 4-0 victory over Burnley.

We believe that Hugo Lloris will retain his spot between the sticks, with Toby Alderweireld and Davinson Sanchez also remaining in the XI after impressing against the Clarets.

In fact, we believe that Mourinho will go for a completely unchanged XI as he seeks some form of consistency in his Tottenham side.

That means Sergio Reguilon and Serge Aurier line up at left-back and right-back respectively, while Tanguy Ndombele and Pierre-Emile Hojbjerg serve as the midfield pivots.

Lucas Moura continues to start in a new number 10 role, which has led to a run of goals for the Brazilian of late.

Heung-min Son and Harry Kane both lead the line as usual, with Gareth Bale passing a late fitness test to start the match in the XI rather than on the bench. 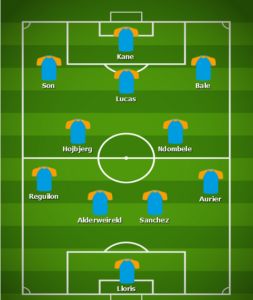 Video: Ex-Spurs man claims Redknapp and Keane should take over this season

‘Has come on so much’ – Robinson urges Spurs to snap...