Tottenham Hotspur face a tough match against Leeds United this weekend in the early Saturday kick-off, a match they must win to keep their top-four hopes alive.

We believe that Hugo Lloris will line up between the sticks as usual, with an unchanged back four under Ryan Mason for the third game in a row.

Pierre-Emile Hojbjerg lines up in the centre of midfield, with Harry Winks returning to the XI to replace Dele Alli. Lo Celso is then allowed to push a little further forward than he did in the game against Sheffield United.

In attack, Ryan Mason goes for the star trio of Heung-min Son, Harry Kane and Gareth Bale, with the latter coming off the back of a hat-trick against the Blades.

Kane will be hoping for some goals and assists to help him towards those top goal scorer and assist awards come the end of the season. 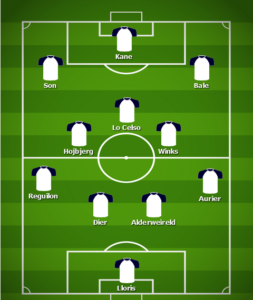 Spurs legend claims club ‘will have money’ to spend this summer

Opinion: The Europa Conference League could provide a lifeline for Troy Parrott

Report reveals when Fabio Paratici will start his new job at...

Spurs legend claims club ‘will have money’ to spend this summer

Opinion: The Europa Conference League could provide a lifeline for Troy...