Tottenham Hotspur welcome Liverpool to North London on Thursday evening in what feels like a crucial match for both sides in their pursuit of the Premier League title.

We believe that Jose Mourinho will name Hugo Lloris between the sticks after the Frenchman was rested against Wycombe in the FA Cup on Monday.

In the back four, Sergio Reguilon returns at left-back, while Serge Aurier also comes back into the right-back slot. Joe Rodon and Eric Dier line up in the central positions.

While Harry Winks has certainly played his way into contention, we can’t see Mourinho being able to resist the tried and tested big-game partnership of Hojbjerg and Sissoko in midfield.

Tanguy Ndombele lines up in the number ten role after the superb cameo against Wycombe, while Steven Bergwijn returns to the XI after getting himself into some great positions last time Spurs faced Liverpool.

Heung-min Son and Harry Kane, of course, are always in the starting line-up when fit. 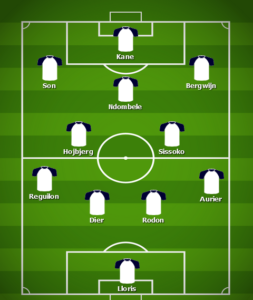