Tottenham Hotspur take on Pacos de Ferreira this evening in the Europa Conference League and will be looking to overturn a 1-0 deficit in order to reach the group stage of the competition.

We believe that Pierluigi Gollini will be back between the sticks again, having impressed in his two outings for the Lilywhites so far.

The defence will consist of Ryan Sessegnon, Eric Dier, Cristian Romero, and Matt Doherty, with the likes of Sergio Reguilon and Davinson Sanchez on the bench.

In the centre of midfield, senior star Pierre-Emile Hojbjerg comes in to offer more solidity, while Harry Winks retains his spot despite a poor outing last time.

Giovani Lo Celso plays as the chief creator in an advanced midfield role, while Bryan Gil is given another chance to impress off the left.

Harry Kane and Lucas Moura provide real firepower up front, with Heung-min Son and Steven Bergwijn on the bench if needed. 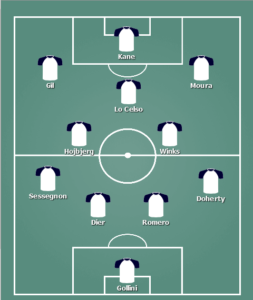 ‘I’d had enough’ – Carragher lifts the lid on his feud...