Tottenham Hotspur kick off their Europa Conference League group stage campaign with an away trip to Rennes this Thursday evening.

We believe that Nuno Espirito Santo will make a few changes to his starting XI while still naming a strong team to face the French side.

Pierluigi Gollini starts between the sticks for his third Tottenham outing, with Ben Davies lining up at left-back and a partnership of Joe Rodon and Japhet Tanganga in the centre of defence.

Matt Doherty comes in for what will likely be a rare appearance, with Emerson Royal taking a spot on the bench.

In the centre of midfield, Harry Winks lines up alongside Tanguy Ndombele, who makes his first appearance of the season. Bryan Gil serves as the creative force just ahead of them.

Steven Bergwijn returns to the line-up on the left, with Lucas Moura on the right and Harry Kane leading the line up front. 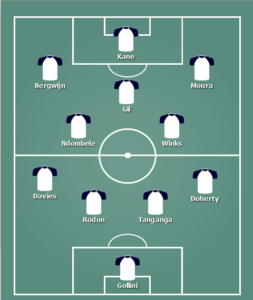 Joe Rodon looks ahead to Rennes and provides update on his...

Alasdair Gold reveals what he has heard about Harry Kane’s January...