Tottenham Hotspur face bottom of the table Sheffield United in the Premier League this weekend, although the Blades come into it off the back of their first win of the season.

We believe that Jose Mourinho will make four changes from the frustrating Fulham draw in mid-week, although Hugo Lloris retains his spot between the sticks.

Sergio Reguilon is replaced by Ben Davies, while Matt Doherty comes in for Serge Aurier at left-back and right-back respectively. Toby Alderweireld also returns to the XI to replace Davinson Sanchez and partner Eric Dier.

Harry Winks, Pierre-Emile Hojbjerg and Tanguy Ndombele all retain their spots in the starting line-up despite the rather lacklustre display in the second 45 against Fulham.

Harry Kane and Heung-min Son start up top as usual, this time alongside Steven Bergwijn to add some more pace and firepower to the attack, with Moussa Sissoko dropping back down to the bench. 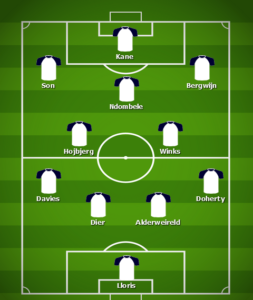