Tottenham Hotspur face an away trip to Stoke City this evening as they look to progress to the Carabao Cup semi-finals.

We believe that Mourinho will name a strong XI, with Hugo Lloris starting between the sticks for the Lilywhites.

Matt Doherty and Ben Davies replace Serge Aurier and Sergio Reguilon respectively, while Davinson Sanchez comes in to give Eric Dier a rest. Toby Alderweireld is the one to keep his place in that back four.

Hojbjerg starts as normal in the engine room, this time partnered by Harry Winks instead of Moussa Sissoko. Dele Alli returns to the starting line-up as the main creative force in midfield.

Up front, Mourinho will show no mercy on Stoke City, naming both Harry Kane and Heung-min Son in a front three. This time, Lucas Moura starts in place of Giovani Lo Celso or Steven Bergwijn. 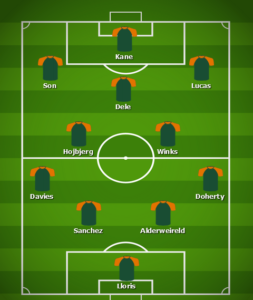