Tottenham Hotspur face an in-form West Ham United this weekend in the Premier League as they look to get back to winning ways in the competition.

We believe that Hugo Lloris will be given the nod between the sticks for the London Derby, while Eric Dier and Joe Rodon will line-up in the centre of defence.

Japhet Tanganga continues to cover for Serge Aurier at right-back, with Ben Davies playing yet again in the absence of Sergio Reguilon.

Pierre-Emile Hojbjerg and Tanguy Ndombele come back into the side after being rested from the start in the Europa League.

Dele Alli and Gareth Bale are also each rewarded with a rare Premier League start off the back of their performances against Wolfsberger on Thursday.

Harry Kane and Heung-min Son, the former of which was rested altogether for the European match, lead the line as usual for Tottenham. Lucas Moura and Erik Lamela drop down to the bench again. 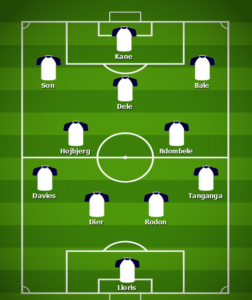