We believe that Jose Mourinho will make just two changes tomorrow night when compared to the team that faced Wolfsberger in the Europa League first-leg last week.

Hugo Lloris retains his spot between the sticks after a good game out in Hungary, while Toby Alderweireld also starts in defence again.

Japhet Tanganga comes in to replace Eric Dier, with both Ben Davies and Matt Doherty starting in the full-back positions as they did last week.

Moussa Sissoko and Harry Winks come in to give both Pierre-Emile Hojbjerg and Tanguy Ndombele a rest in midfield.

After impressing last week, Dele Alli gets another start in Europe and will be looking to add more goals and assists to his name as he continues his fight back.

Gareth Bale was arguably Tottenham’s best player against Wolfsberger and West Ham United, so he starts from the right again.

Lucas Moura lines up on the left after his solo goal last week, while Heung-min Son is rested and Carlos Vinicius is handed a rare start. 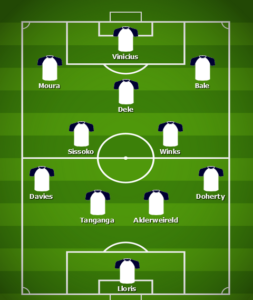