Tottenham Hotspur take on Wolves in the Carabao Cup this week, as Nuno Espirito Santo once again comes up against his former club.

With Spurs having lost to Chelsea at the weekend and with Arsenal on the horizon, we are expecting a number of changes from the Portuguese head coach.

We expect to see Pierluigi Gollini to start between the sticks, with Hugo Lloris rested for the North London Derby.

Ben Davies and Japhet Tanganga start at left and right-back respectively, with the latter returning from his one-game ban after seeing red against Crystal Palace.

At the heart of defence, we see a partnership of Davinson Sanchez, back from Croatia, and Joe Rodon, who has performed well since coming back from injury.

In midfield, Oliver Skipp returns to the starting XI, with Harry Winks given the nod and Giovani Lo Celso handed a deeper role than the one he played against Chelsea.

Unfortunately, with injuries to Moura and Bergwijn, there is little opportunity for a rest for the likes of Harry Kane and Heung-min Son, although Bryan Gil does come in for another start. 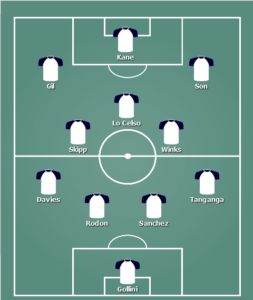 Report: Tottenham star’s father releases book – Including how he trained his son

‘Back to tokenism’ – Finance expert blasts Tottenham for recent decision

Report: Tottenham star’s father releases book – Including how he trained...

‘Back to tokenism’ – Finance expert blasts Tottenham for recent decision

Report: Tottenham star’s father releases book – Including how he trained...