Tottenham Hotspur face a trip to Wolves this afternoon, their first away match of the new Premier League season.

We believe that Nuno Espirito Santo will name an unchanged line-up from the XI who started the win over Man City on the opening weekend.

Hugo Lloris retains his spot between the sticks, while Gollini having played in the Conference League match on Thursday.

Japhet Tanganga continues to best Doherty and Aurier in the fight at right-back, especially after that MOTM display against City. Sergio Reguilon lines up on the other side as a more attacking full-back.

Eric Dier and Davinson Sanchez surprised many with their near-perfect performance against Pep Guardiola’s men and, therefore, retain their spots.

The midfield three of Pierre-Emile Hojbjerg, Oliver Skipp and Dele Alli also remains, with Steven Bergwijn, Heung-min Son, and Lucas Moura interchanging as the front three. Harry Kane is in the squad, but only on the bench. 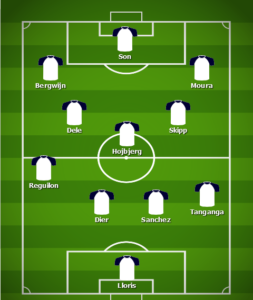