Tottenham Hotspur face Wycombe Wanderers in the FA Cup fourth round on Monday as they look to remain in all four competitions this season.

We believe that Jose Mourinho will ring the changes for the match, considering that Spurs have a huge game against Liverpool in mid-week.

Joe Hart starts between the sticks with an experienced back four of Ben Davies, Davinson Sanchez, Toby Alderweireld, and Japhet Tanganga ahead of him. Matt Doherty and Serge Aurier have both been described as doubts for the game, so Tanganga covers at right-back.

Moussa Sissoko and Harry Winks line up in central midfield to give Pierre-Emile Hojbjerg a much-needed rest ahead of the Liverpool game.

Erik Lamela takes up the number ten role with Carlos Vinicius and Lucas Moura ahead of him. Heung-min Son is also given a run out from the start, although will only likely play around 50 minutes.

Dele has also been described as a doubt for the game, while Lo Celso remains out injured. 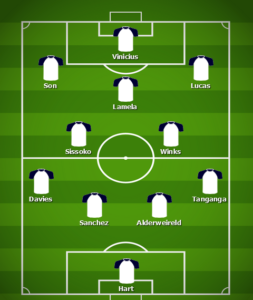