Tottenham Hotspur take on Brentford this evening in the Premier League and the predicted XI feels rather obvious and unexciting this time around.

We believe that Antonio Conte will likely field the same starting XI he attempted to play against Burnley before the match was called off this week.

Hugo Lloris will start between the sticks, with Sergio Reguilon and Emerson Royal in the two wing-back positions. The back three we think will consist of Eric Dier, Ben Davies and Davinson Sanchez, with Cristian Romero out injured for the long term.

In the engine room, Oliver Skipp returns to the Premier League XI after serving his ban last time out against Leeds United, pairing with Pierre-Emile Hojbjerg as normal.

Up front, Harry Kane, Heung-min Son and Lucas Moura will all be searching for some much-needed goals to kickstart some attacking form in North London, with none quite able to hit their stride in that respect so far this season. 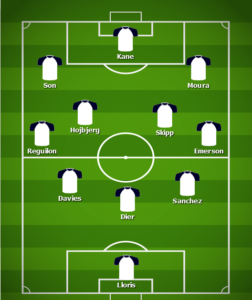