Home News Predicted Tottenham XI to play against Everton away in the FA Cup...

Tottenham Hotspur take on Everton in the FA Cup this week as they look to qualify for the quarter-finals of the prestigious competition.

We believe that Jose Mourinho will name a strong Xi for the encounter at Goodison Park, with Hugo Lloris starting between the sticks instead of Joe Hart.

Ben Davies lines up at left-back with Toby Alderweireld and Joe Rodon in the centre of defence. Matt Doherty comes into the side after Serge Aurier picked up a knock against West Brom.

Pierre-Emile Hojbjerg starts again in midfield, as he has more often than not this season, this time partnered by Harry Winks who has found minutes hard to come by of late.

Tanguy Ndombele serves as the main creative force, although Erik Lamela, who impressed against West Brom, will be coming off the right-hand side to lend a hand.

Of course, Harry Kane and Heung-min Son line up in attack for the Lilywhites. 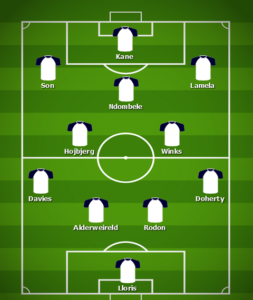