Tottenham Hotspur face their biggest match of the season so far on Sunday as they travel to Wembley to play Man City in the Carabao Cup Final.

We believe that Ryan Mason will keep his team largely the same as the one that defeated Southampton in his first match in charge, with two key differences.

Hugo Lloris starts between the sticks after his superb performance against the Saints in the Premier League.

The back four also remains unchanged despite a poor first half against Southampton, with Sergio Reguilon, Eric Dier, Toby Alderweireld and Serge Aurier making the XI.

In midfield, Giovani Lo Celso drops to the bench and Harry Winks comes in to add more balance in the engine room. Pierre-Emile Hojbjerg keeps his place and Tanguy Ndombele lines up as the more advanced central midfielder.

This will leave space for Harry Kane to drop into the number 10 role should he desire, with Gareth Bale also having the license to step off his right-wing position. Heung-min Son rounds off a deadly strike trio. 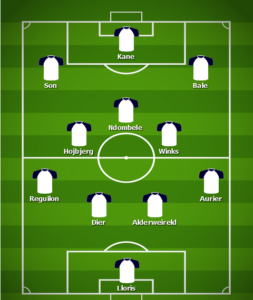