Tottenham Hotspur take on Mura in the Europa Conference League this week as they look to bounce back from a dismal North London Derby.

We believe that Nuno will make a fair few changes for the match, bringing Pierluigi Gollini back into the starting line-up, with Hugo Lloris rested.

The back four will be all changes for the Lilywhites, with Ben Davies, Joe Rodon, Cristian Romero, and Emerson Royal all starting against Mura.

In the centre of midfield, Oliver Skipp starts after an impressive cameo against Arsenal, while Harry Winks is finally given another chance to impress by Nuno.

Just ahead of them, Giovani Lo Celso serves as the main creator for the North London side, with the likes of Dele Alli, Tanguy Ndombele, and Pierre-Emile Hojbjerg rested.

Heung-min Son is the only player to keep his spot in the XI from the Arsenal team, this time up front alongside Dane Scarlett and Bryan Gil. 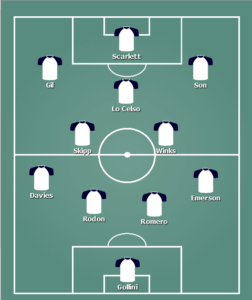 Video: Emerson Royal sent off within 20 minutes of his return to Brazil team

Report: Spurs close to agreeing deal to ship out player who is not in Conte’s plans

Report: Club set for board meeting about player after Tottenham make offer

Video: Emerson Royal sent off within 20 minutes of his return...

Report: Spurs close to agreeing deal to ship out player who...

‘Won’t go away’ – Journalist claims Bergwijn could leave Spurs under...

Video: Emerson Royal sent off within 20 minutes of his return...